RANGER U IS HISTORY...IT WENT WAY TO FAST!

Hi everybody!!!  I'm baaaaack! I am still on my euphoric "Ranger U High" but after traveling all day, I am starting to "come down".  haha  I wanted to share a few things with you tonight and then I will share more tomorrow as I am able to download pictures and get more than two brain cells to work efficiently.
Ranger U was one of THE MOST incredible experiences of my life! In an artistic sense, it is THE most incredible experience!
But, before I ever got to Ranger U, I was shown the INTEGRITY and CHARACTER of some of my fellow Ranger U buddies.  I have GOT to share this story with you before I can chronicle the Ranger U experience itself.
Most of the Ranger U attendees traveled to get to Ranger Industries on Thursday, April 28th.  That was also the day that Mother Nature unleashed her nasty side...a VERY nasty side.  There were horrible tornadoes in Alabama and storms up the eastern coast.  Flights were delayed and cancelled all across the country.  It was total chaos at the airports.

Hels Sheridan, Cheryl Grigsby, Yvonne Blair, Linda Ledbetter and I immediately struck up a friendship upon the announcement of the Ranger U attendees.  We had agreed to meet at the Newark Airport and shuttle together to our hotel.  The last to arrive was supposed to be Linda at around 6:30.  Hels was coming in from the UK at 1pm.  The rest of us were staggered arrival times up until Linda's arrival at 6:30.  Hels came in on time.  The rest of us were EXTREMELY DELAYED.  Everyone but me finally got to the Newark Airport by around 8:30.  I was hung up in Chicago (imagine that) and would not arrive in Newark until around midnight.
To make an incredibly long story short....these four beautiful ladies...inside and out, would NOT go ahead and keep the shuttle scheduled to pick us up earlier in the evening.  They insisted on waiting for my plane to land; knowing full well it was not due in until MIDNIGHT! For Hels, that amounted to an eleven hour day sitting in the Newark Airport after getting off of a long plane ride from the UK!!  For the rest of these dear dear friends, it meant at least 4 additional hours of sitting in an airport; waiting for me. 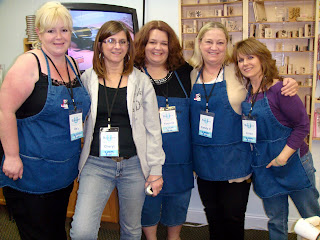 So, here we are..."The Airport Girls" as we dubbed ourselves....Hels, Cheryl, Yvonne, Me and Linda.  I will NEVER forget that!  That spoke VOLUMES to me about the heart of these ladies.  Aren't they great?  Part of the magic of Ranger U was getting to know the people.  Let me tell you, there were quality people in that room!
Tomorrow....day one of Ranger U.  Tonight...going to catch a few zzzzzzzzz's!
Posted by Candy C

Email ThisBlogThis!Share to TwitterShare to FacebookShare to Pinterest
Labels: Ranger U 2011