THE ROAD TO SINGAPORE

Isn't that an old Bob Hope/Bing Crosby movie?  Anyway, I just returned from the most phenomenal almost three weeks in Asia.  What an amazing culture, history and people!  Our three stops took us to Singapore, Hong Kong and Beijing, China.  This was a once in a lifetime opportunity for me and an experience I will never forget!
Singapore
Singapore is unique because it is a city and a country with the same name.  It is a country that is about 10 miles wide by 20 miles long.  It is home to 5.5 million people.  Yes, that is right ... 5.5 MILLION people!  They only grow about 5% of their own food.  So they import the other 95%.
Singapore has a lot of British influence.  They drive on the opposite side of the road, as they do in Great Britain.  They have high tea and English is fairly easily spoken.  All the signs are in English accompanied by Chinese characters.
Because their country is so small with a huge population, they have no choice but to build UP.  I have never seen so many high rises in my life!  But they are beautiful! 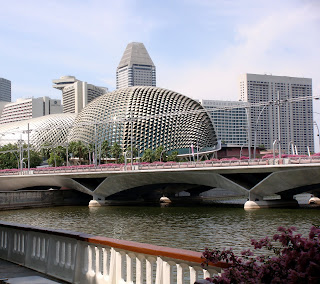 When I looked out over the landscape and saw so many high rises stretching as far as the eye could see, it almost reminded me of a mountainous landscape out of Star Trek; only the mountains were high rises, housing millions of people.  Many of the buildings were ultra modern; twisting and turning in the most beautiful shapes.  The government subsidizes a lot of the high rise housing.  We were told that it is not uncommon for a very standard 800 square foot condominium to begin at $250,000 - $300,000 and in the higher end neighborhoods be well into the millions of dollars. 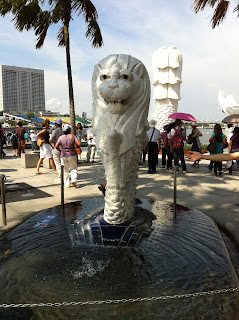 The "Merlion" is the national symbol of Singapore.  It is a cross between a Lion and a Mermaid and takes up permanent residence at the Marina. 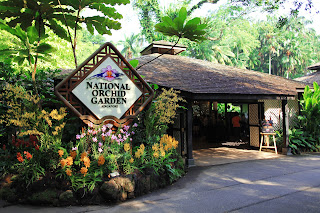 Singapore's main export is orchids.  We visited the National Orchid Garden and saw thousands of species of orchids and tropical plants.  It was absolutely beautiful.  Our guide was so informative.  We even learned how they cross pollinate their flowers. 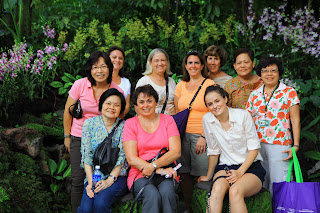 Here are the lovely group of ladies I was with and our wonderful hosts. 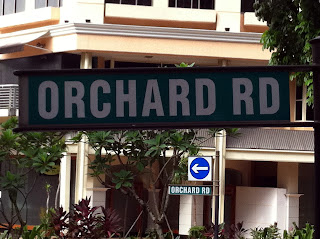 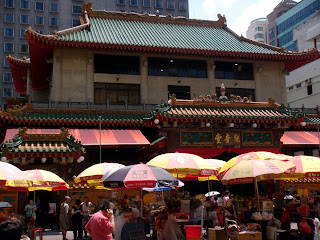 The shopping in Singapore range from the very high end to the open markets. Orchard Street was like the Million Dollar Mile in Chicago with mall after mall of top designer stores like Gucci, Valentino, Tiffany, etc.  I'm a Walmart kind of girl...so while the high end shops were fun to stroll through, I did my power shopping at the really fun open air markets.

There was one area of shopping called Bugis Village.  Within that area, there were two temples, a Buddhist temple and a Hindu temple.  People were burning incense and offering gifts and prayers.  I didn't want to seem disrespectful so I did not enter their temples but I did snap this picture of part of the Hindu Temple.  I thought it was absolutely beautiful. 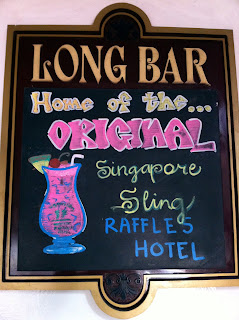 Ever heard of a "Singapore Sling"?  Here is where it was founded...in the Long Bar of the Raffles Hotel. 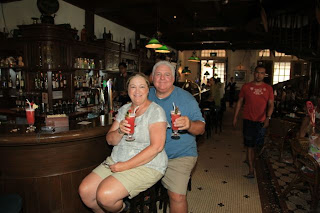 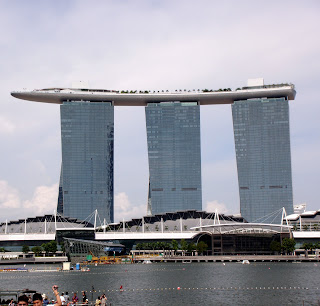 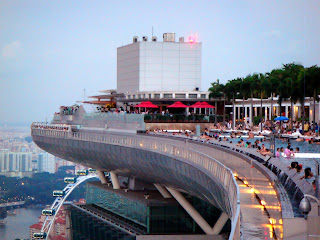 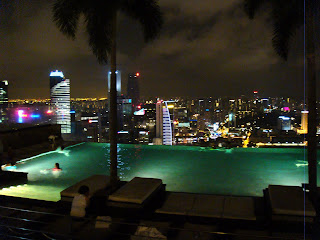 Probably the highlight of the trip was Sky 57!  It is a modern marvel!  The three towers rise 57 stories above the ground.  These are office buildings and also a large hotel.  At the very top is an expanse that stretches over all three towers.  There is a restaurant at one end and an outside bar at the other end.  In the middle is a beautiful lighted infinity pool landscaped with palm trees and lush vegetation.  If you are at the open edge of the infinity pool, you literally feel like you are sitting at the edge of the world.  The view is simply breathtaking.  If you look out on one side of this expanse, you see the lights of Malaysia twinkling off in the distance.  If you look off the other side, you see the lights of Indonesia.  Look down and you are completely surrounded by the beautiful lights and high rises of Singapore.
Our next stop was Hong Kong....  stay tuned!!!
Posted by Candy C

Email ThisBlogThis!Share to TwitterShare to FacebookShare to Pinterest
Labels: Singapore