I warned you guys!!!  Halloween (other than Christmas) is my favorite holiday for crafting!!!
A good friend and I were wanting to make a coffin box~book.  We'd seen several different variations of these on the internet but none that was exactly what we'd envisioned.  So, we put our heads together and came up with our own rendition of a three dimensional box that is also a book!

My Artchix buddies came over to my house this past Monday and we spent the day making this SPOOKY but FUN Halloween piece! 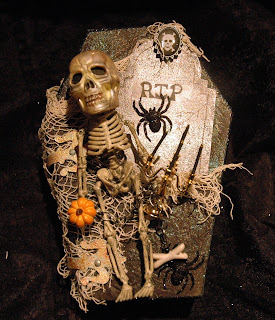 It's basically made out of black chipboard, black cardstock and a Tim Holtz' large ring binder.  While the design is my own...I have to say that I was heavily influenced by Laura Denison from Following the Paper Trail when it came to the skeleton on the cover.  She was the first I saw to use a regular skeleton body but adding a larger skeleton head on it.  I thought that was hysterical and I used that idea.  So, thanks to Laura for being so clever!
Laura is a fellow Ranger U grad and a very talented and innovative designer of all sorts of intricate things.  If you've not checked out her blog, you should!! 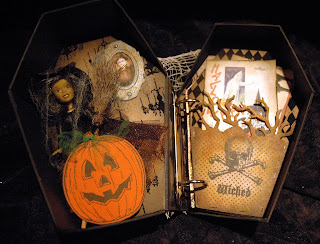 As I said in the beginning, this is a box but it's also a book!!  I love that you have room inside the front cover to really do some dimensional work.  So, when you open the cover of this spooky little coffin, you will find a witch waiting in the wings!  She's all decked out in her black cardstock hat, black and orange tulle skirt and black tulle cape. 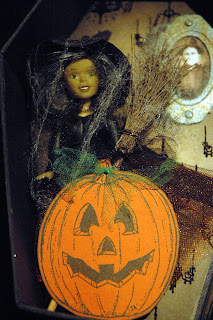 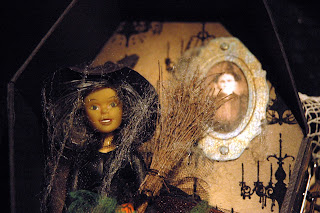 She's just waiting for Halloween night so she can fly off on her broom.  In the background, is a picture of her "Mummy".  Mwaaaaah-ha-ha! 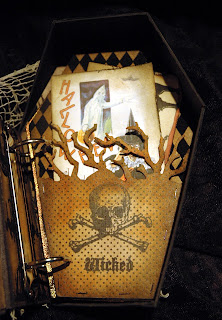 The opposite page is a pocket with spooky twigs (thanks to Tim Holtz' Twigs die cut).  Inside are vintage Halloween postcards. 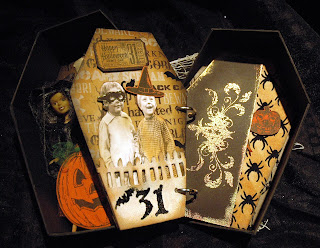 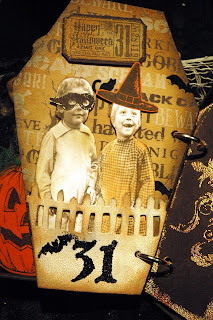 Turn the page and you are greeted by vintage Halloween trick or treaters.  Tim's picket fence die is a perfect topper for this Grungeboard picket fence pocket! 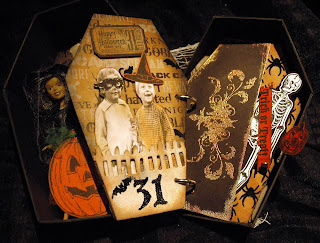 On the opposite page, you can pull on the vintage pumpkin and Mr. Skeleton will appear to say "Trick or Treat"!  Otherwise, he likes to hide out underneath the embossed partial coffin top. 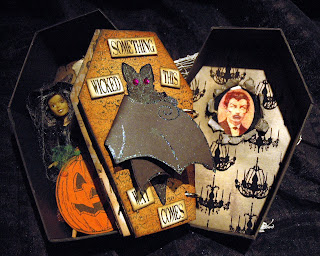 Turn the page again, and you're greeted by a spooky bat.  But wait...he's got a surprise! 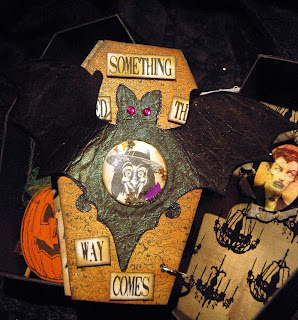 His wings open up to reveal a witch in his tummy!  This was made using clear plastic packaging from Tim Holtz' Time Pieces, his witch stamp from his Mini Halloween 2 stamp set and some Halloween confetti.  The bat's skin is done with the Ink Refresher technique I shared with you a few weeks ago when I introduced you to Mr. Bones. 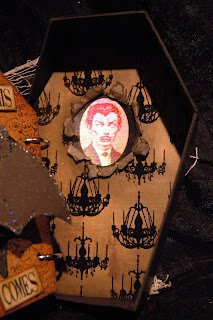 The back interior wall of the book features a "Goretrait".  Again, I was influenced by Laura Denison.  She used a "Goretrait" ~ or a picture that appears so be normal and then you shift it and it becomes a ghoul ~ in her coffin box.  I thought that would work perfectly in a space that has to be fairly flat because the book rests against the back when the box is closed.  So, I tore away an area on the back paper where my Goretrait would be ... and made it appear as if the ghoul's portrait was busting through the wall paper!! 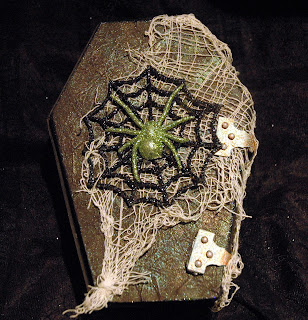 Close the coffin box and here is the back cover.  I wrapped the loose ghastly netting from the front around to the back because I loved the texture of it.  You may recognize the "hardware" straps.  They are from Tim Holtz' Hardware Findings die cut and made to look like weathered metal.  The "skin" on both the front and back of the book are also made using the Ink Refresher technique.


So, there it is....my coffin box and book!!!  I loved making this and allowing myself to just create and have fun!  It is a very welcomed piece to add to my Halloween decorations....sitting with Mr. Bones and my ATC Halloween Mini Drawer (see on previous posts).

I hope you're having a delightfully crafty week!  Remember to take time to PLAY ....
It's SOUL FOOD!
Posted by Candy C