Hello my blogging friends!
No ... no ... I'm not taking a cue from all of the craft and hobby stores and putting up Christmas stuff yet.

But, I did recently get my new Tim Holtz St. Nick die cut and was playing around with it today.  I wanted to share him with you because I think he turned out really cute! 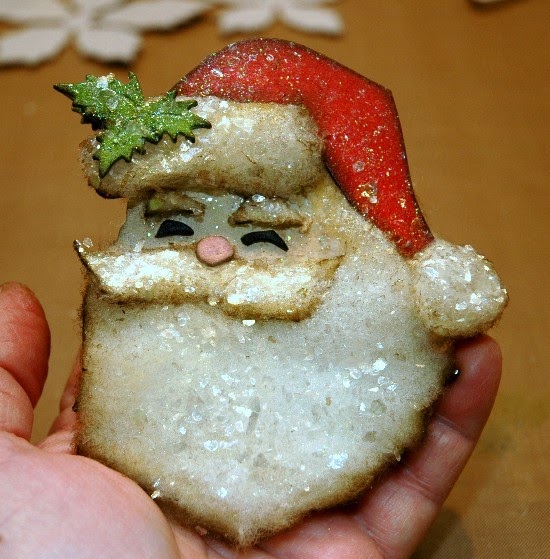 I got so engrossed in making this little guy that I forgot to take pictures of every step but I think there are enough for you to get the idea.

I began by die cutting all of St. Nick from Plain Grungeboard.  Then I gave all of the pieces a basecoat of White Gesso.  I'm not sure it was necessary to do that but so much of Santa's beard is white, I thought the gesso background would be good and it also gave me really true red and green colors on the hat and holly.

I wanted this Santa to be dimensional and take on the appearance of a very retro-ish 1950s looking ornament.  So, I gave Santa a real beard and hair and "fur" and pom pom on his hat.  I'll talk more about that in a minute. 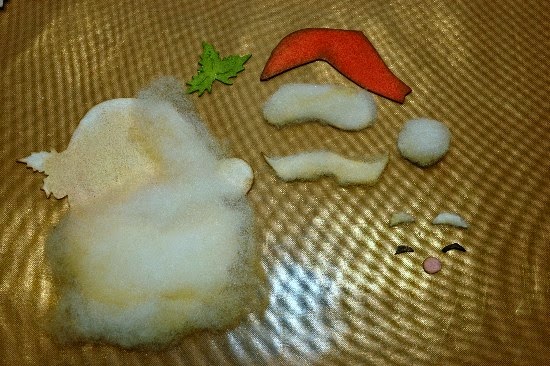 After the gesso was dry, I laid the pieces out and figured out where Santa's face would be so that I could give him flesh tone skin and lightly drew the outline of his face in pencil.  Then using Wendy Vecchi's Pale Ochre Archival Ink and a touch of Victorian Velvet Distress Ink on top, I gave Santa a flesh tone face.  His cheeks (although they are hard to see underneath his beard and mustache) are Victorian Velvet.  All of the Archival Ink was applied using small pieces of Cut 'n Dry Foam.  The Victorian Velvet was applied using an Ink Applicator. Santa's hat is Wendy Vecchi's Vermillion Archival Ink with a bit of Potting Soil Archival Ink around the edges. The holly on his hat is Wendy's Leaf Green Archival Ink with touches of Pine Needles Distress Ink to shade parts of the leaves. The eyes are black from a Pitch Black Paint Dabber and the nose is Victorian Velvet Distress Paint with Potting Soil around the edges. 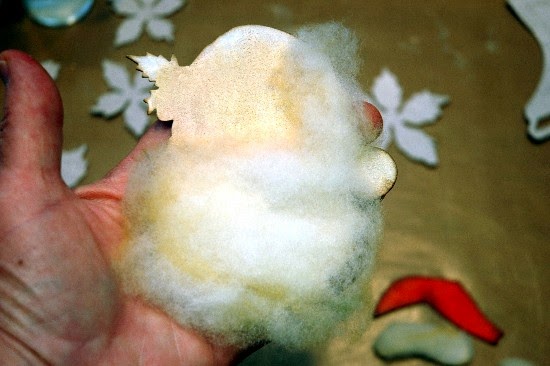 I gathered small bits of white "fluff" (stuffing you use inside of pillows or to create fake "snow" for Christmas scenes) and pulled it apart to make it less dense.  Then I used some Honey Spray to lightly age and darken the whiteness of the "fluff". Next I applied clear drying glue all over the areas where Santa's beard and hair would be and pressed the "fluff" in place.  He would later get a "hair cut".  This was just to get the fluffy "hair" in place.  I also repeated this same step on the pom pom, furry cuff of his cap, his mustache and even on his eye brows. 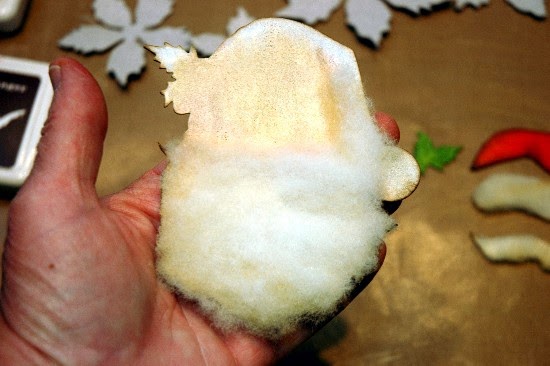 After a few minutes, I took used small detail scissors and began giving Santa a trim.  I trimmed around the outsides edges of the die cut and also trimmed off some of the thickness of the fluff. Then I took the Cut 'n Dry Foam piece with Potting Soil and edged all around every furry piece to give a distinct distressed edge for definition. I even lightly brushed the Potting Soil on some of the fur along the edges to give him even more dimension. This was especially important on the eye brows and the mustache that would have gotten lost in the beard. 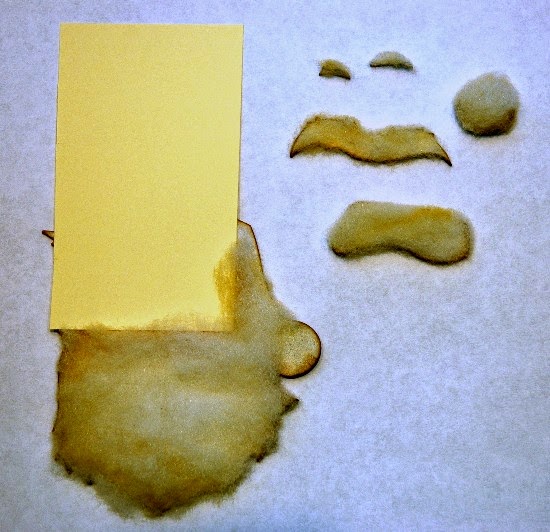 I love the retro-ish look that mica "snow flakes" add to vintage pieces so I added them to my Santa.  I covered where Santa's face would be with a piece of scrap paper and laid all of my furry pieces on a piece of white paper.  I lightly sprayed some Adhesive Spray and gently sprinkled all of these pieces with little Mica Snowflakes.  I gently tapped them into place and then removed the excess flakes. Then I removed the scrap paper covering Santa's face and began gluing all of the pieces together to create my Santa, layering each in it's appropriate position. 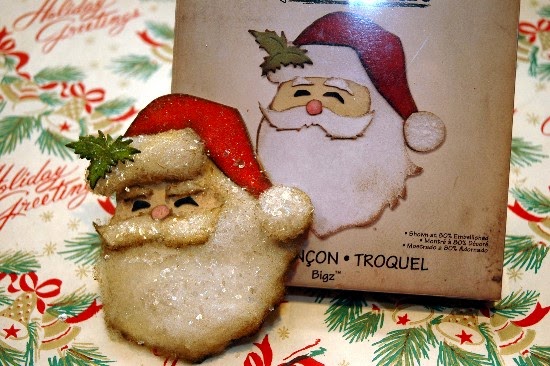 Here is my finished Santa face again and I have it laying next to the actual die cut so you can see the what a difference adding the dimensional "fluff" and little Mica flakes makes.  I absolutely love this little guy and can see him as a Christmas package adornment, an ornament hanging on a Christmas tree or a very retro-ish embellishment for any type of Christmas home decor piece or scrapbook layout.

These are so much fun to make and really don't take a lot of time at all.  Once you figure out the first one, you could get an assembly line of them going in no time.

Thanks for stopping by!  Enjoy your weekend!