Here is my entry for this week in SIMON SAYS STAMP CHALLENGE - SHOW US STRIPES. 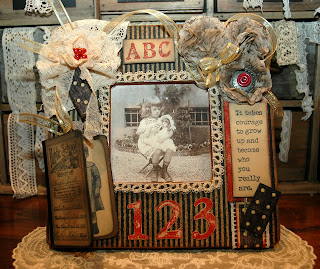 I started out with an inexpensive wooden frame from Michaels.  I painted the sides and back with Raw Umber and covered the front with a stripe paper from Graphic 45's Communique collection.  Then I added the vintage lace to the upper edge and fashioned an "attic flower" out of the same lace.  I added some reddish pearls to the center and added a tie from a piece of left over lace.  I also added some vintage lace around the edge of the picture portion of the frame and behind the domino strip on the right side of the frame.  This was supposed to be another stripe on top of the stripes...but it pretty much got covered up with my tissue paper flowers and the saying I attached to that side.
I made a little "Public School Report Card" from an Oxford Impressions stamp from their "School Days" set.  LOVE their stamps! The "ABC", "123", the little boy inside the report card and the saying are all from the same set.
The book is made from stamping on cardstock, cutting it out and gluing it on to chipboard.  I then inked the image and the chipboard with Vintage Photo, Walnut Stain and Black Soot Distress Inks.  I attached the front of the book to the back of the book using black masking tape as a book binding.
The tissue paper flowers are made from plain sepia colored tissue paper I found on clearance at Hobby Lobby.  I folded the tissue several times and used a scallop 1 7/8" punch to punch out the flower.  Next I stamped images onto the flowers using Black Soot Distress Ink and several collage type stamps.  I put about 12 of them together, folded them in half and punched a small hole in the center.  Then I opened the flowers out again and I could tie the flowers together by running a thread through the two holes and tying it together in the back of the flower.  I ran a little ribbon throughout the flowers for that extra little interest and hot glued everything into place.
Finally, I cut two more dominoes out of the Graphic 45 paper, attached them to black chipboard and put some Glossy Accents on the cream dots on the dominoes.  When they were dry, I glued them into place.  Now I have a new little vintage frame...thanks to Simon Say Stamp Challenge!!
Take time to play!! It's SOUL FOOD!!
﻿
Posted by Candy C