"MAKING ART" WITH MY GRANDSON

Hi Everyone!  Happy Saturday!
I hope you're having a wonderful Saturday and making some time to experiment and play!

You've heard the old saying, "that was so easy, even a child could do it!"  Well, here is proof that even a child can "make art" with Tim Holtz' new Distress Paints!

Last evening, my husband and I babysat for our son and his wife so they could have a much anticipated "date night". Our six year old grandson, Cooper, is quite the budding artist and always wants to come to "Mimi's house" to "make art" in the studio.

Last night after dinner, Cooper and I made our way to the art studio while "Papa" entertained our two year old granddaughter, Katie by playing dolls and watching Mickey Mouse Clubhouse.  (He's a good Papa).

Cooper had made some strips out of regular typing paper and markers a while back.  He said he made them for me and gave them to me.  I told him that the next time he came over, we would make something with them...so I kept them. 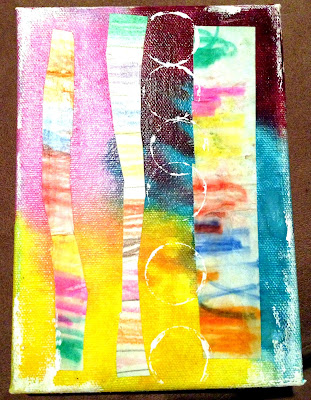 Here is what we ended up making....a 5x7 canvas using some of the strips that Cooper had made me.  I wish the lighting of this picture was better because the colors of the canvas are really quite stunning.

Cooper used Tim Holtz' new Distress Paints to make a background on a canvas that I had prepared with white gesso.  He watched me put the paints on a canvas and then he did his all by himself.  He liked watching the paints run as they interacted with the spritzed water.  Then he dried the paints with my Craft It Heat Tool.  Next he selected the strips he wanted to use on the canvas and glued the backs of them with a glue stick.  (I would have chosen Matte Multi Medium...but this was HIS project, not mine!)  I just made sure he had them glued really well on the back so they would stick.

He glued the strips in place and then I just made sure that they were stuck! The only thing that I did on this canvas was to seal it with Matte Multi Medium when it was dry.  That was what we did next.  I brushed the Matte Multi Medium on and while it was drying, Cooper stamped away on some typing paper using all of my train stamps.  His favorite...Tim's On The Railroad stamp set.

Finally, I told Cooper that it might be neat to add some paint circles or something to his canvas.  I used the lid of a stamp cleaner bottle and showed him how if you dip the edges in white paint, you can stamp them onto the canvas.  He liked that idea so he made his own design on the canvas using the lid.  Then finally, I added just some light brushes of white paint (using my finger) randomly on the edges of the canvas because Cooper didn't want to get his hands dirty!  haha

I was so proud of his art piece!  So was Cooper!  My son and his wife absolutely love the canvas and say it will be hung in a prominent spot in their home.  I'm hoping maybe Cooper will make another one for me.  I love it and want to hang one in my art studio.

Have a great day and take some time for yourself to play!!!  Get your kids or grandkids in the craft room with you!  What a great way to spend some time together!