EVERY WITCH NEEDS A NEW HAT!!!

Recently, I posted a witch hat that I was going to make with some art buddies. We made them and had a wonderful time! I had some extra 12" x 16" paper mache witch hats. They are an awesome size because you can put lots of "stuff" on them! When you're finished, you have a really fun Halloween decoration...great for table centerpieces!
Instead of completely spray painting the hat black, this time, I opted to cover the main portion of the hat in text out of an old book. That way, I could have a lighter background to work with and also be able to colorize it with Distress Inks. Then I added some headlines or partial headlines out of our local paper I had seen yesterday morning as I was thumbing through the paper. I thought they added a humorous touch.
I am a HUGE Tim Holtz FANatic! So, I wanted to use some of my new Tim Halloween Stamps as well as some of my other favorites from his Ideaology and Alterations lines as well as some appropriate Distress Inks and Stickles. 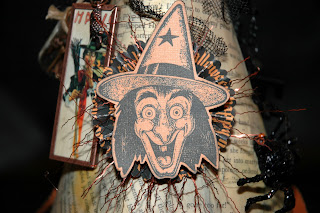 I LOVE Tim's new Halloween stamps and his new rosette die. Here, I am combined the two with a little bit of orange tinsel thrown in for good measure. This witch is actually placed on the backside of the hat. 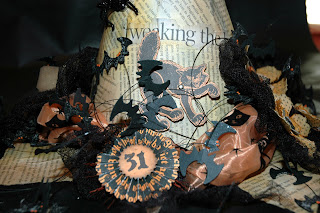 Here is the rosette die again on the front brim of the hat with a "31" stamped on the center piece and then inked around the edges with Black Soot. The black cat just behind the rosette was stamped onto orange card stock. I left an orange edge around the stamp when cutting it out and then edged it in Black Soot. Although the cat is not jointed, the two little brads give it that appearance. 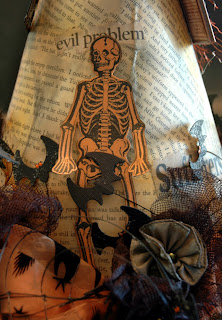 This spooky skeleton was also done exactly the same way as the black cat. I tucked him onto the side of the hat among some really cute orange flocked Halloween fabric I used to make a cute sash on the brim of the hat. I also made some vintage looking "attic flowers" out of blackish ribbon, black netting and some spooky green pearls as the center of the flower. The bats flying all around the hat were made from a Fiskars bat punch, fishing wire spray painted black, Rock Candy Stickles on the front sides of the bat and little orange eyes painted with orange puff paint. 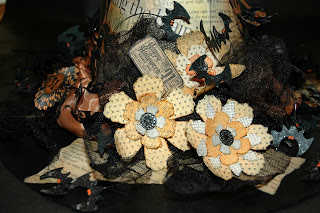 I used Tim's Tattered Flowers die to create these Halloweenish flowers made out of natural duck cloth. I cut them out, colored them with Spiced Marmalade, Rusty Hinge, Wild Honey, Walnut Stain and Black Soot for a spooky edging. Next I stamped them with a couple of Wendy Vecchi's stamps. I glued them together and added an old vintage black button as the center of each one. They are on the front of the hat, nestled into the orange sash and some black netting as well as the flying bats. You will also see Tim's new Halloween ticket stamp tucked into the flowers. 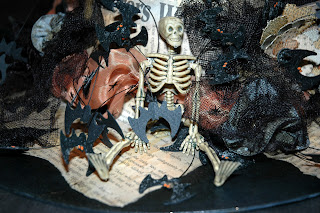 Mr. Skeleton decided to hitch a ride on the witch's brim.  He's a Dollar General find. He's resting on the back side of the hat. 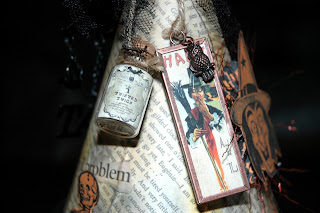 I added some of my own little concoctions of a "Twisted Twigs" bottle and a Memory Frame with a portion of an old vintage postcard in it with a little owl charm attached to the top. I love things that dangle and move on my pieces. I found the "Twisted Twigs" label on the Internet, sized it to fit my bottle, glued it on with Glossy Accents and then put Rock Candy Stickles on the label to add color and dimension to it. I filled the bottle with little grape vine twisted sticks and glued the top on with Glossy Accents. The "Trick or Treat" metal hanger on the front of the hat was a JoAnn's Fabric find after Halloween last year. It was flat black and orange so I added Black Diamond and Orange Peel Stickles for that "zing" it needed to really set it off against the text background.
Then I added a top knot made out of more of the orange flocked Halloween fabric and stuck a few flying bats coming out of it. Wha-lah.......a new Halloween witch hat! 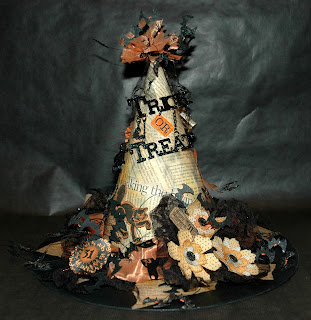 Have fun being creative and making your own art!  It's "soul food".
Posted by Candy C