A CANDLE IN THE WIND ... MARILYN MONROE ART JOURNAL PAGES

Happy Hump Day to everyone!

I am fascinated by Norma Jeane Mortenson better known as "Marilyn Monroe".
I don't really know why.  Perhaps it is because of the dichotomy of her life.  She was loved by millions but could never find true happiness in her own life.  A beautiful girl who had everything yet, in the end, took her own life out of complete dispair and loneliness.  Such a sad ending to such a "candle in the wind".

"Loneliness was tough.
The toughest role you ever played.
Hollywood created a superstar
And pain was the price you paid."  ... Sir Elton John

I created a couple of pages in my mixed media art journal celebrating her and I wanted to share them with you. 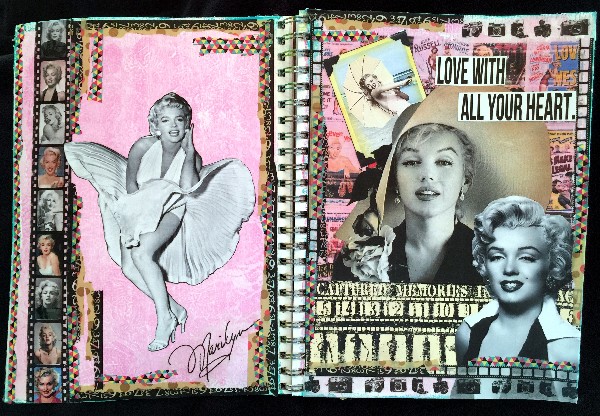 My page on the left might still be a work in progress.  But since the right side has so much going on, the simplicity of the pink background is appealing to me.

I created these pages using all sorts of things; but primarily just images of Marilyn that are saved to my computer, tissue tape, words cut from a magazine and all sorts of movie posters of Marilyn Monroe movies that I used in the right side background.

First I used a brayer and lightly went over the surface of both pages with DecoArt's Media White Gesso.  Immediately I mixed DecoArt's Media Fluid Acrylics Primary Magenta with Titanium White to create a soft but vivid pink color (reminiscent of the color of the pink dress Marilyn wore in her movie, "Gentleman Prefer Blondes").  Taking the brayer with white gesso still on it, I rolled over the pages again, adding the pink.  This left some very cool texture and variations of the pink color in the background.

Next, using my finger, I swiped DecoArt Media Fluid Cobalt Teal Hue randomly around the edges of the 9"x12" watercolor pages in my art journal.

The movie posters were sized and arranged to fit on an 8 1/2" x 11" piece of paper (that would fit through my ink jet printer).  But I wanted the pink background color to show through.  What to do???  Ahh....how about printing on semi transparent deli paper? 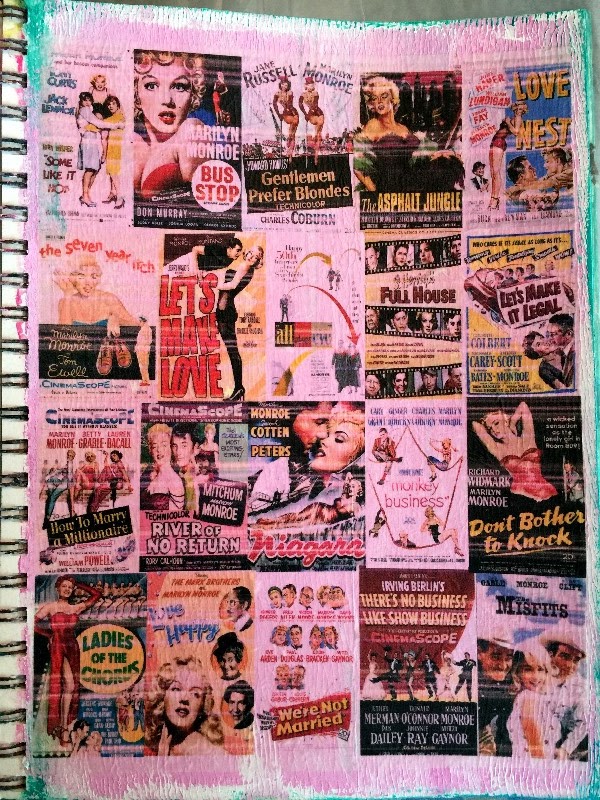 But unless the ink was protected, I was afraid that when I started adding glue or Matte Medium or other elements of the page over the inkjet print, I might have a total mess of running inkjet ink.

I wasn't sure if it would work or not, but after very gently heat setting the printed posters (still attached to the copy paper), I lightly brushed DecoArt's Media Satin Varnish over the top of the deli paper to seal it. I was afraid that the colors and ink might run BUT IT DIDN'T!!  I set it to the side to air dry.  But I later tried this again and if you gently heat set the DecoArt Satin Varnish, it doesn't bubble up.

Next I removed the deli paper from the copy paper, brushed DecoArt Media Matte Medium over the surface of the pink background, laid the deli paper in place and gently pressed it to adhere to the Matte Medium and I let that air dry as I began to cut out my other Marilyn images that I would be using.  I added another topcoat of DecoArt Media Satin Varnish over the posters and gently heat set it. 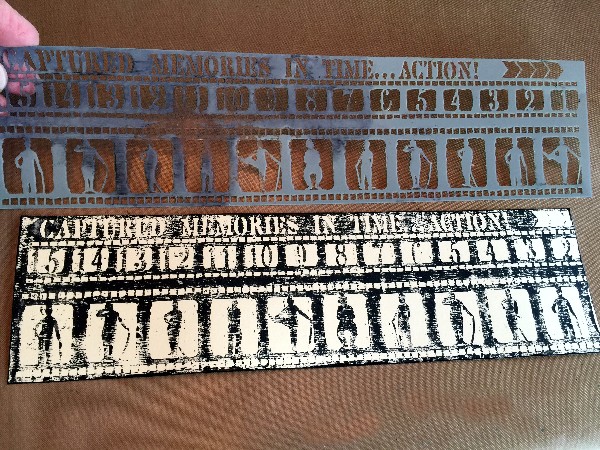 I LOVE this stencil from Andy Skinner.  It is available through Decoart.com and now possibly in some selected JoAnns Fabrics stores and at JoAnn.com. JoAnn is now carrying DecoArt's new Media line of products!

This is a 9"x3" stencil called "Old Film".  But rather than use it as a stencil, I used it as a stamp.  I brayered over the back side of it using DecoArt Media Fluid Acrylics Carbon Black and then pressed it onto a piece of manila cardstock.  I love the sketchy result! 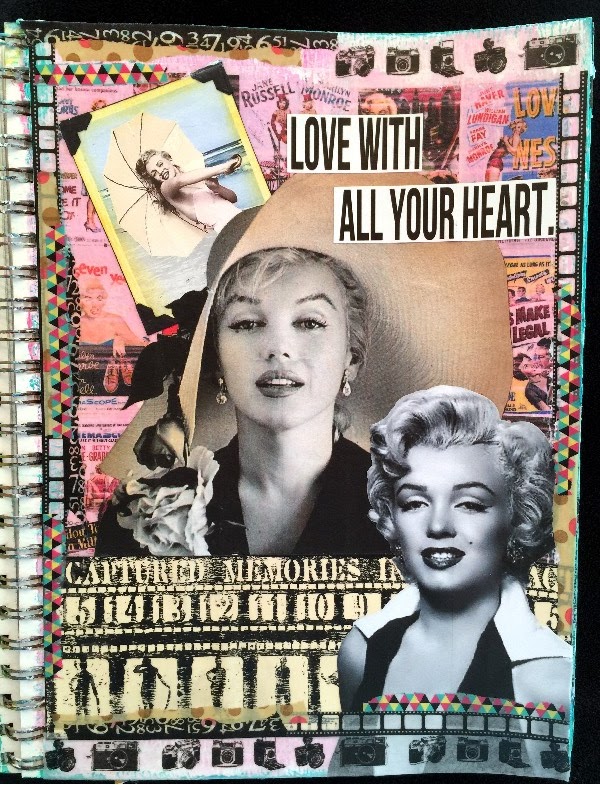 And it works perfectly in my collage of vintage Marilyn images.  After I layered all of my Marilyn images, I began adding the tissue tape to blend all of the edges of the deli paper into the 9"x12" watercolor backing.  Finally I added the magazine sentiment.

Marilyn's autograph was also printed out onto deli paper.  I tore the paper around the autograph because torn paper tends to meld into a background easier when glued in place using a matte medium or other glue/sealer.  In this case, because I really didn't want any type of an edge to show, I used DecoArt's Media Ultra Matte Varnish to first glue and then seal the autograph in place.  It works so well to disguise paper edges and blend them into the background!  Almost as if Marilyn signed it herself!

Thanks for stopping by!  Enjoy the rest of your week and the lovely final days of summer.  Take some time to experiment and play with your creativity!