Good Monday morning everybody!  The Design Team at Simon Says Stamp and Show Challenge has gone all out for you again this week with some really inspiring, unique HATS!  Be sure to check them out!!  You will be AMAZED!

My HAT was inspired by Graphic 45's Le Cirque collection.  I thought it would be a kick to create a whimsical clown hat using those fun, colorful papers...and it was!  They have great circus graphics ... no need for extra embellishments...you can easily make them from the images on the papers! 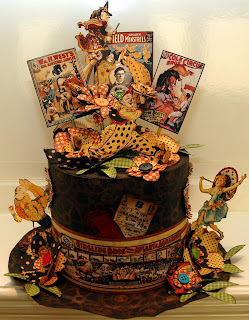 To make the basic hat, I started off with a couple of sheets from Graphic 45's Steampunk collection.  I used a dinner plate as a pattern for the base/brim of the hat.  How's THAT for using the ol' noggin?  Then I cut a smaller circle and cut it out of chipboard.  I covered both sides of the chipboard with the brown paper.  Next I cut two 6" strips of the brown paper and sized them to make the body of the hat.  I cut 1/2" slits at the top and the bottom so that when I made a circle out of the strip of paper, it would easily bend and I would have some "tabs" to glue to the base and the top piece of the hat.  Then I cut a round piece out for the top of the hat and glued everything into place.  I curled up the brim a little bit to give my clown hat a little more character.  The basic hat was cute...but pretty bare at this point but not for long! 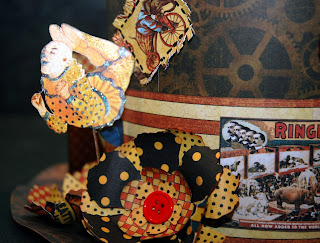 I made a hatband out of some striped paper.  Then I cut out a couple of "patches" for my clown hat, drew in some "stitching" and fringed the edge to make it look like fabric patches.  I stuck them in place with Wonder Tape.  Next, I die cut a bunch of flowers out of different Le Cirque papers using Tim Holtz Tattered Flowers die cut.  Those papers are double sided deliciousness!!!  I also used Sizzix #5 Flower die cut to make a few of those wonderful layered roses. Some petals I curled up.  Some I curled down.  Some I inked with a Black Cats Eye ink pad around the edges.  But I mixed them all up so that I would have some very interesting, colorful "clownish" flowers.  I popped little colorful buttons as centers on the flowers that needed them. 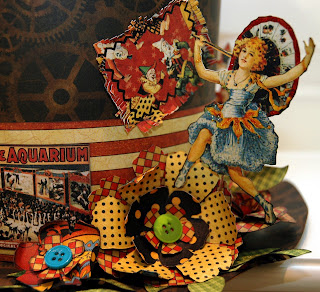 Next I cut circus posters out of one sheet of paper.  Then I found several different clowns and circus entertainers I liked and cut them out. I inked around all of the edges with a black cats eye ink pad.  Then I stickled the circus performers' costumes to give them that extra "pop".
Finally I stamped tickets from two of Tim Holtz' stamp sets, distressed them and tucked them in the hatband.  All the elements were made!  Time to put it all together! 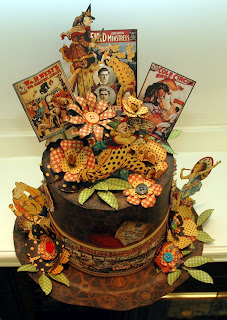 I cut a hole in the top of my clown hat with an exacto knife and peeled the top back.  I stuck a piece of Styrofoam in the center of the hat and put a little green excelsior grass over it.  I inked small dowel rods using Fired Brick, Scattered Straw and Peeled Paint Distress Inks, hot glued the sticks to the back of the circus posters and popped them into the styrofoam. 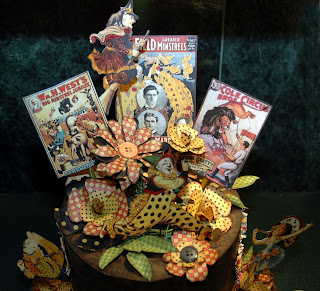 I stuck some of the flowers and circus performers on brown wire so that they could stick up and out of the flowers.  I hot glued everything into place and ended up with this really fun clown hat!  Easy to make and waaaaay fun to do! 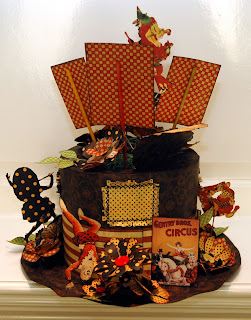 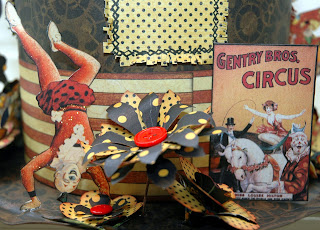 Now it's YOUR turn to put on YOUR thinking cap and create A HAT!!  Then come on over to Simon Says Stamps and Show Challenge and enter your creation!  YOU could win our sponsor's generous $50.00 credit voucher to Simon Says Stamp or you could receive our coveted Elite TOP 3 Blinkie to proudly display on your blog.

This lets everyone know that your work has been recognized as OUTSTANDING!
Come on...it's fun!  I hope to see your HAT soon!
Posted by Candy C